I Vow Not To Burn Out

At the end of January, one of my close spiritual friends died. A queer Black man, a Sufi imam “scholartivist” (scholar–artist–activist) and professor of ministry students, Baba Ibrahim Farajajé died of a massive heart attack. He was sixty-three, and I’m guessing he had been carrying too much. It was only six months earlier that Baba and I had sat together on a stage in downtown Oakland, California, under a large hand-painted banner that read #BlackLivesMatter. A brilliant, transgressive bodhisattva, Baba had been targeted for multiple forms of oppression throughout his life and had not been silent about it. When he died, I was sad and angry. I took to staying up all night, chanting and meditating; during my daytime work, I was exhausted.

How many of us who have taken the bodhisattva vow are on a similar path toward burnout? Is it possible for us, as disciples of the Buddha, to engage with systemic change, grow and deepen our spiritual practice, and, if we’re laypeople, also care for our families? How can we do all of this without collapsing? In my world, there always seems to be way too much to do, along with too much suffering and societal corruption and not enough spaces of deep rest and regeneration.

When I get desperate, which is pretty often, I ask myself how to not be overwhelmed by despair or cynicism. For my own sake, for my family, and for my sangha, I need to vow to not burn out. And I ask others to vow similarly so they’ll be around when I need them for support. In fact, I’ve formulated a “Great Vow for Mindful Activists”:

Aware of suffering and injustice, I, _________, am working to create a more just, peaceful, and sustainable world. I promise, for the benefit of all, to practice self-care, mindfulness, healing, and joy. I vow to not burn out.

It’s the first thing I give to students in my yearlong program of secular mindfulness for social justice activists. I ask them to sign and date it, because each of them, through their work as community leaders and agents of change, is a precious resource.

The cosmic bodhisattvas like Sadaparibhuta and Avalokitesvara and the rest of the gang don’t burn out. Maybe they have big muscles from continuously rowing suffering beings to the farther shore. They are willing to take abuse while demonstrating unfailing respect and love toward sentient beings. When something bad happens, they immediately absorb the blame. They vow to return, lifetime after lifetime, until the great work is fully accomplished, and until that probably distant time they remain upbeat, serene, and self-sacrificing.

I love this section from the poem “Bodhisattva Vows” by Albert Saijo:

This poem never fails to give me a refreshing laugh; the archetype of bodhisattva activity it presents resonates with my early Buddhist training. But I have changed. In the social justice activist circles I travel in, giving your lifejacket away and going down with the sinking ship is now understood as a well-intentioned but mistaken old-school gesture—right now, the sinking ship is our entire planet, and there are no lifeboats. As the people with disabilities in my sangha have said, in order to practice universal access there needs to be a radical shift toward an embodied practice of “All of us or none of us.” In other words, no one can be left behind on the sinking ship, not even those who want to self-martyr. Why? Because self-martyrdom is bad role modeling. Burnout and self-sacrifice, the paradigm of the lone hero who takes nothing for herself and gives everything to others, injure all of us who are trying to bring the dharma into everyday lay life through communities of transformative well-being, where the exchange of self for other is re-envisioned as the care of self in service to the community. The longer we live, the healthier we are; the happier we feel, the more we can gain the experience and wisdom needed to contribute toward a collective reimagining of relationships, education, work, and play. 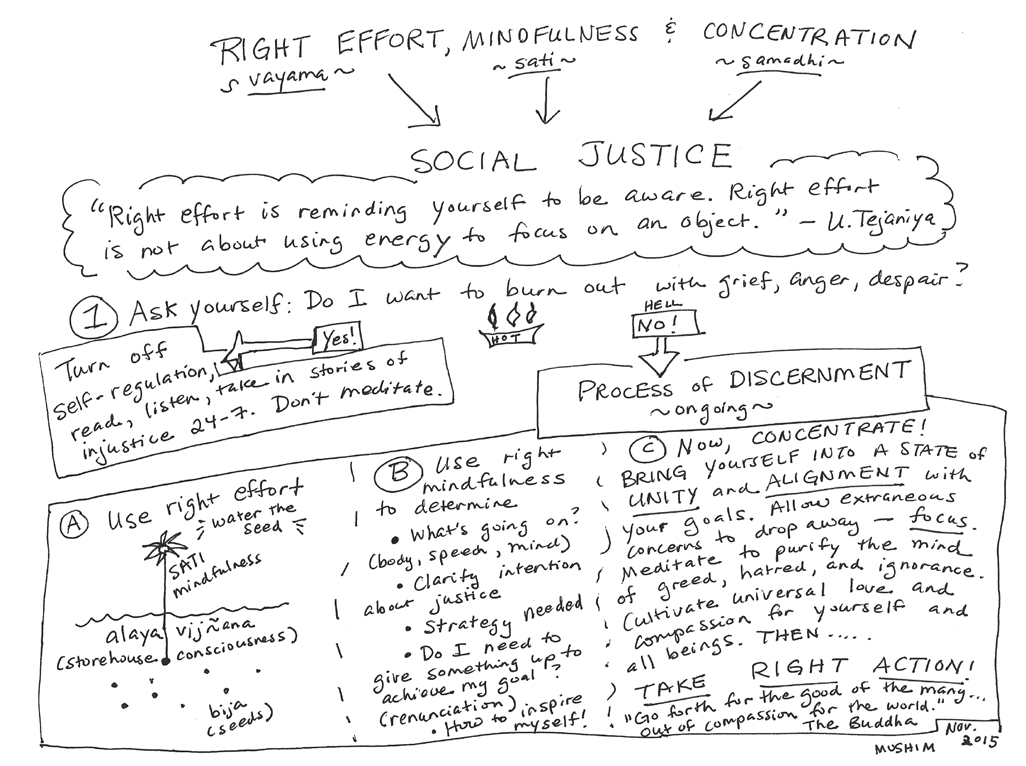 Here in Oakland, I don’t think it’s melodramatic or inaccurate to say that we now live in the midst of multiple ongoing crises. Thich Nhat Hanh has said that the future Buddha, Maitreya, may be a community, not an individual. Perhaps your community, like mine, is in need of inventive ways to carve out spaces for what some are now calling “radical rest.”

I advocate for more forgiving and spacious schedules of spiritual practice that value being well-rested and that move toward honoring the body–mind’s need for enough sleep and downtime. Social justice activist Angela Davis, in an interview in YES! Magazine, says:

I think our notions of what counts as radical have changed over time. Self-care and healing and attention to the body and the spiritual dimension—all of this is now a part of radical social justice struggles. That wasn’t the case before. And I think that now we’re thinking deeply about the connection between interior life and what happens in the social world. Even those who are fighting against state violence often incorporate impulses that are based on state violence in their relations with other people.

Healing. Rest. Self-care. Restorative justice. Restorative yoga. Trauma-informed dynamic mindfulness. Compassion. Love. Community healing. These are words I hear every day within spiritual activist forums, from “scholartivists” and from people embodying the bodhisattva vow to save all beings.

Dr. Martin Luther King, Jr. and his fellow organizers sometimes planned protests to occur at around eleven in the morning, because then the people who were arrested would get lunch in jail and wouldn’t have to wait many hours to eat. For those of you who may feel that social-change work isn’t your thing, or that it’s too big to take on, it may help you, as it helped me, to know that it often comes down to these little details. Every movement is made of real people, and every action is broken down into separate tasks. This is work we need to do and can do together.

How can you make your life sustainable—physically, emotionally, financially, intellectually, spiritually? Are you helping create communities rooted in values of sustainability, including environmental and cultural sustainability? Do you feel that you have enough time and space to take in thoughts and images and experiences of things that are joyful and nourishing? What are your resources when you feel isolated or powerless?

Samsara is burning down all of our houses. We need a path of radical transformation, and there’s no question in my mind that the bodhisattva path is it. Speaking as a mother and a woman of color, I think we’re all going to need to be braver than some of us have been prepared to be. But brave in a sustainable way—remaining with our children, our families, and our communities. We need to build this new “woke” way of living together—how it functions, handles conflict, makes decisions, eats and loves, grieves and plays. And we can’t do that by burning out.

This article was originally published  on lionsroar.com

Featured photo by unclelkt on Pixabay.